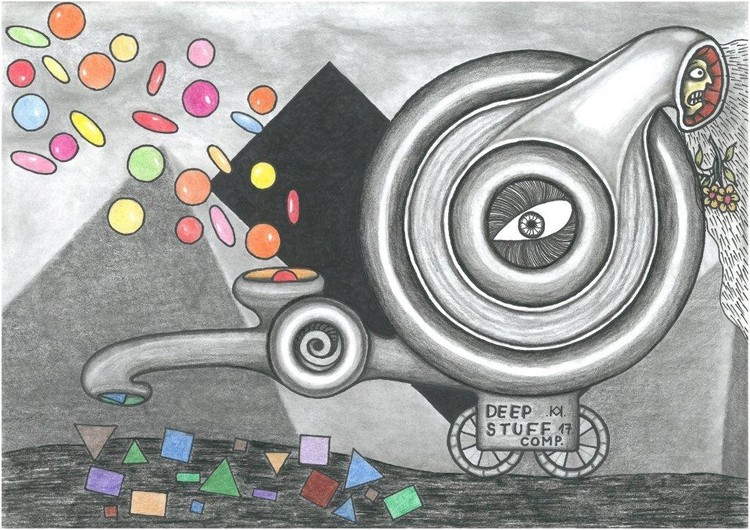 We sat at the table and discussed how to resist the attacks of evilsnails (see http://storiesofoldbone.blogspo t.hr/2013/12/zlopuzevi- evilslugs.html) when the door to our shelter was opened and explorer Pepe Fajgl went in, all breathless. "Misfortune never comes alone," he said as he sat on the chair, "Geometricos appeared in the east of the Earth of Fantasy, in the abandoned pyramids. It is moving slowly but has already sucked and digested many living beings. Mika Trta has, in my eyes, become a ball or perhaps a triangle." The emergence of Geometrycos in Earth Fantasy is no news, this enormous machine - some claim biomechanical creature - periodically devastates an area of the World of Fantasy from every form of life. It is not known where it then disappears, but behind it remains a pile of very hard cubes and other geometric shapes. The inhabitants of the World of Fantasy are angry and sad watching the wreckage left by and complaining to the unhappy beings that Geometricos was eating. Time cures anger, and when the sorrow passes, they collect cubes and squares, noting that it is a very good material for building houses and other objects. It is very likely that the remains of Mike Trte will be great in the near future as part of someone's home. A 3 format