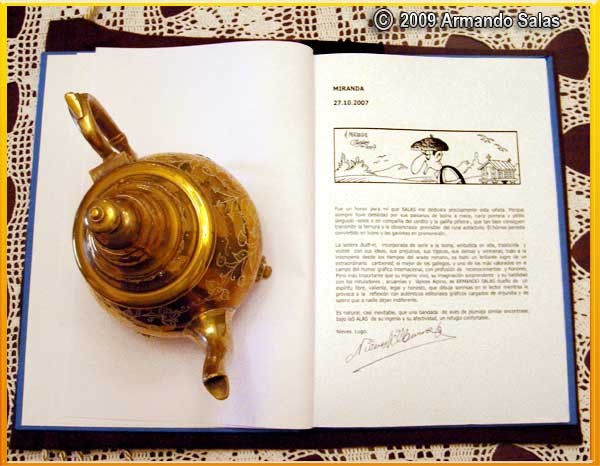 A group of unknown fans, readers of my works at daily El Correo Gallego, organized a meeting-tribute to me at Santiago de Compostela. It was a wonderful, emotive and unforgettable meeting with those people. I got a lot of presents: Argentinians gave me one issue of EL ETERNAUTA, the masterpiece of comic art due to Solano López (drawing) and Germán Oesterheld (script). Oesterheld was an acclaimed writer; he was killed by Argentinian dictator General Videla and his complices.--- More presents: "La Codorniz. Antología (1941-1978)". "La Codorniz" was a successful humor magazine published in Spain. I used to read it when I was a child (this way I started my career:-). One of the readers is also an embroiderer :-) and he made an unique personalized bag. I'm sure you'll recognise the guy embroidered on it :-). Finally, the most soulful present: each reader chose his/her favorite strip of mine and wrote a comment and a dedication to me. All those pages were joined to make a new book: "ARMANDO LA MEMORIA". Clever people: this title has double meaning. Literally, ARMANDO LA MEMORIA means ARMANDO THE MEMORY. Since ARMANDO, my name, is also the gerund of ARMAR ( = build, construct, establish) this title can refer to a way to write a daily chronicle, a method to keep safe our history through my work.-----------------Upper image: "Armando the memory". Bottom image: El Eternauta, La Codorniz and the bag :-)