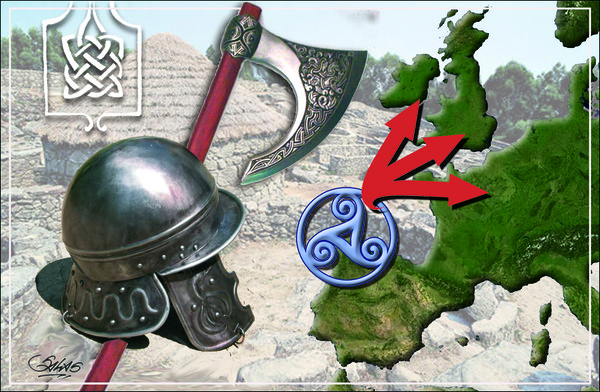 © 2010 Armando Salas.------Digital image (cover) for NORDESIA, cultural magazine published weekly by the newspaper DIARIO DE FERROL.----- Supposed the Celtic people invaded Spain, a modern theory ("Paleolithic Paradigm") based on genetics and other studies demonstrates this people already lived in northwestern Spain in the Paleolithic. This means: WE, the Galician people, were the INVADERS :-) and those arrows just show the paths. I often speculated about my jewish or arabic roots but the thuth is finally revealed: I'm a Celtic barbarian still living in the Age of Bronze :-). The blue symbol is the Celtic TRISKEL, something I added to my signature lately. ------ Upper image: digital work. It was an unexpected commission and I only had an hour to work on it. Bottom image: cover of Nordesía Magazine.