Wrigley Field-Home of the Chicago Cubs 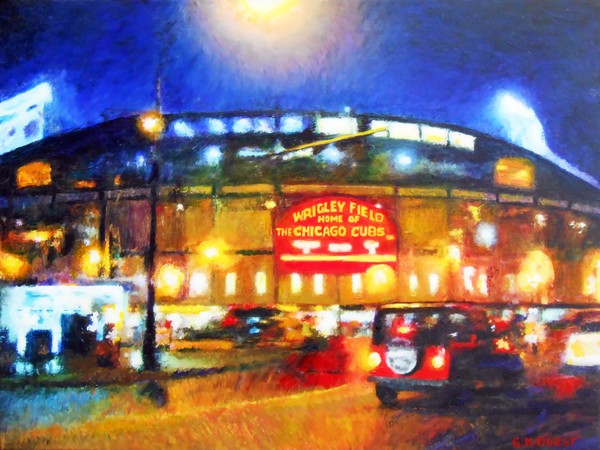 This is beautiful impressionist painting of Wrigley Field is part of a series of Chicago artworks that Dr Durst has created for the Chicago Artists Month. This work shows the iconic and much loved, Wrigley Field, which is home to the Chicago Cubs. It measures 18” by 24” and is gallery-wrapped, i.e. painting on all, sides so it doesn’t have to be framed. Since its completion three weeks ago, this painting has been featured on ten art web sites and has been voted First Place in the “Life Is Awesome” online exhibition on Fine Art America as well as top honors in the “Buildings” and “Nightscapes” exhibitions out of thousands of submissions. Dr Dursts artwork shows two major features of Wrigley Field: the Marquee and the lights of a night game. The marquee is so iconic with the park, that the owners of the park, both past, and present, have used the marquee in some way as the park's trademark of sorts: even the CTA platform that services Wrigley Field (the CTA Addison St. station,) has an image of the marquee painted on a wall announcing the destination, rather than simply marking it with black block letters. Night Games The Cubs were a hold-out against night games for decades, not installing lights at Wrigley until 1988 (after baseball officials announced that the park would be prohibited from hosting any future post-season games without lights). Before then, all games at Wrigley were played during the day. Night games are still limited in number by agreement with the city council. To add further interest, the artist shows the lights of Wrigley Field with a light rain shower which makes the streets glisten and reflect the powerful lights and add to a magical feeling. It seems that the viewer can hear the roar of the crowd while sharing the feeling of the fans of wondering whether the misty shower will pass or is a forerunner of a storm that could call the game off. As with most of his works, the artist strives to make the image three-dimensional to create an intimate magical moment. His works are also to create a sense of peace and harmony for the viewer. For a Chicago Cubs fan, and a one who appreciates the history of Wrigley Field and its meaning to Chicago, this would make an ideal gift that would last a life time. Think of how this would look beautifully framed in an office or den. What could be better? About the Artist: Dr. Michael Durst According to the Ico Gallery in New York’s Chelsea district, “As a psychologist, Dr. Dust’s paintings create not only beauty for the beholder, but also a state of relaxation and healing. His work combines realism with impressionism, evoking an emotional link to the heart-thus the name: Heartscapes. His exhibitions in New York, Cape Town, the Netherlands and India have received rave reviews and gained Dr. Durst international renown. Dr. Durst loves to paint the beauty of Chicago’s architecture and its people. His Portraits, Fractal Visions and Abstracts have won First Place awards from Fine Art America and Fine Art International as well. Reviews: ART FOR THE HEART by Hilary Benjamin, The Atlantic Sun, September, 2007 WHEN ART AND MATHS ADD UP by Wendyl Martin, The Argus, November 2011 Exhibitions: 2004-2006 Sun International Gallery, Cape Town 2008- The Blue Dolphin Gallery in the Netherlands 2009-Perspectives of Reality- Ico Gallery, New York 2010- "The Rhythmic Figure" Ico Gallery, New York 2011-Seven Wonders of the World" Machu Picchu Gallery, India 2011-Classic Art Gallery, Waterfront Cape Town 2012-Cape Professional Artists- Kirstenbosch Garden, Cape Town 2012-Picturesque Gallery-Cape Town 2012-Gallery Africa-Waterfront- Cape Town 2012-The Bay Gallery at the Bay Hotel in Camps Bay, Cape Town 2012-Le Franschhoek Gallery, Franschhoek, near Cape Town 2013-Gallery Africa, Cape Town 2014-Gallery Africa, Cape Town 2014-Picturesque Gallery, Cape Town Solo Exhibitions: 2007-Heartscapes of the Cape- Eclectic Gallery, Cape Town 2008-Postcards from the Heart of Cape Town-Table Bay Hotel, Cape Town 2009-Magical Moments in Sea Point-Eclectic Gallery, Cape Town 2011-The Wonders of Fractal Art- Eclectic Gallery, Cape Town 2012-Best of Show-Winchester Mansions, Cape Town 2015-Euphoric Visions- Winchester Mansions, Cape Town 2015-Euphoric Visions- Winchester Mansions, Cape Town 2015-Chicago Artists Month- Greanleaf Art Center, Chicago Books: 2010-Cape Town Heartscapes- the works of Dr. Michael Durst 2011-The Wonders of Fractal Art Copyright Notice: All images are fully protected by U.S. and international copyright laws, all rights reserved. The images may not be copied, reproduced, manipulated or used in any way, without the written permission of Dr. G. M. Durst.