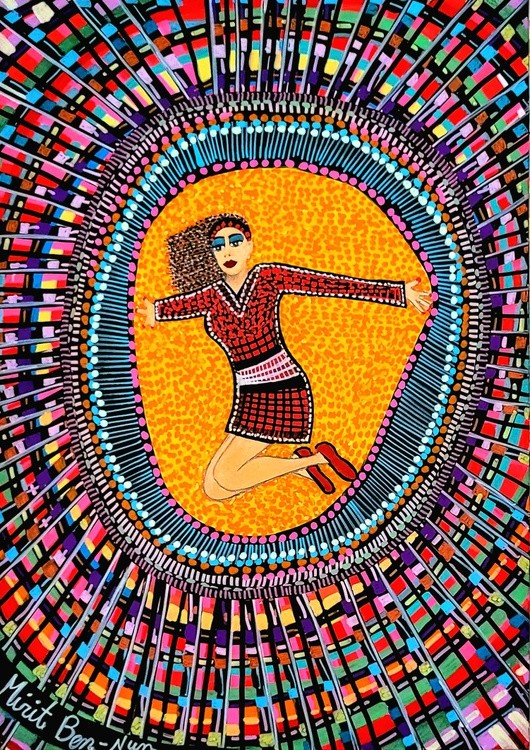 A free Spirit Mirit Ben-Nun was born in Beer- Sheva in 1966. Over the years she has presented in solo exhibitions and participated in group exhibitions in Israel and around the world. When she was six, her father was killed in a car accident, leaving behind his wife and two daughters, Mirit and Dana. Ben-Nun had difficulty concentrating on studies, which caused behavioral problems, and at the age of fourteen she dropped out of the education system and went to work. The colors and writing tools gave her a quiet private space and her own way of surviving. Creativity eased her tumultuous soul. Until her early 30’s she worked as a telemarketer and for the next fourteen years she doodled and doodled. While talking to customers she filled thousands of pages with lines and dots that resembled hundreds of compressed eggs and seeds which she threw away. In a large portion of each page she would pick a random word and would write it down over and over while concentrating on her hand movements. Even then she noticed the rising of her need and obsession as she practiced the endless doodling and writing. Ben-Nun testifies that the lack of artistic training to paint "correctly" freed her from adhering to the rules of painting and allowed her freedom and spirit of rebellion. In 1998, she received a bunch of canvases and acrylic paints as a gift from her sister. She brought the acrylic into her world of lines and dots; she went back to painting women and masks that appeared in her childhood paintings and flooded them with lines and dots without separating body and background. This is also the moment when Ben-Nun began to refer to herself as a painter. and when art became the center of her life. The intense colors in Ben-Nun's paintings sweep the viewer into a sensual experience. The viewer traces the surge of dots and lines formed in packed layers of paint. The movement leads to a kind of female-male hormonal dance within the human body and to a communion with an artistic experience of instinct, passion, conceiving and birth. Contributing to this experience is the wealth of characteristics reminiscent of tribal art. Ben-Nun merges these with a humorous and kicking contemporary Western Pop art. In the language of unique art, Ben-Nun creates an unconventional conversation between past and present cultures. It is evident that the paintings emerge from a regenerated need and desire, a force that erupts from her soul, a subconscious survival instinct to which she cannot or does not want to resist. Ben-Nun places women at the center stage where they are her work focus. The paintings obsessively deal with the existential experience of being a woman in the world. A few of the women's paintings carry feminist slogans stressing the women's struggle in society, a critique for being held to perfection and being required to perform as a model of "beauty, purity and motherhood". Feminism pulsates in Ben-Nun's psyche, through her diverse female images and the play between beauty and unsightliness; Ben-Nun assimilates the consciousness of feminine possibility, of not being "perfect", of being powerful, influential, and outside social norms. This mandates a departure from acceptable limitations where Ben-Nun creates a new world of free spirit for women. Mirit Ben-Nun is a mother of three and the grandmother of three grandchildren. Mirela Tal https://www.amazon.com/dp/9657589290?ref_=pe_3052080_397514860