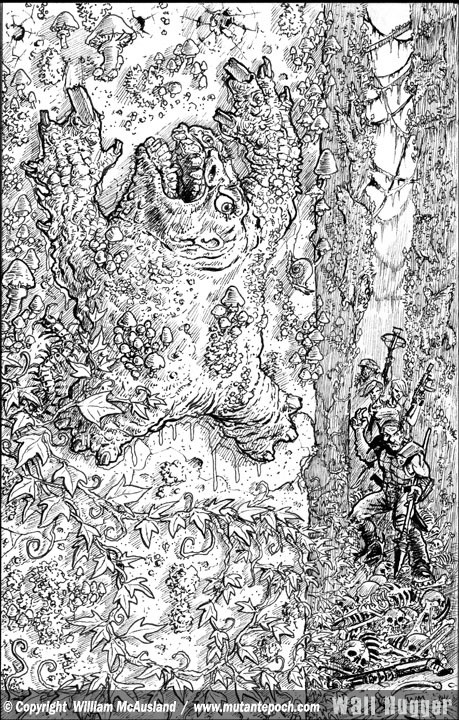 Wall huggers, also called wallers, are like a cross between a human sloth and a flying squirrel, but often weigh as much as a full grown man. They’re highly territorial, bad tempered omnivores, often covered in moss and mushrooms and spend much of their lives clinging to the sides of ancient buildings, cliffs, bridge girders and vast hulls of abandoned ships. In most cases, ruin explorers don’t even realize what’s hit them when these hideous sub-human creatures hit them. An impact from a falling waller can knock a person out during its first impact, but to get one of these damn things stuck to your back, raking and biting, can also shorten an excavator’s career. Still, wall huggers are known to inhabit the same high rise for generations, and carry their half eaten or unconscious victims aloft to stuff in vast bone pits — along with whatever treasure, gear and wondrous relics they wore along with them. It is these macabre troves which many dig teams can’t resist, and which often lead them to their doom. This is my 23nd Monday Mutant for The Mutant Epoch (TME) Tabletop RPG. This 11 page PDF includes a short sample adventure ‘The Wall Hugger’s Tower’ for 6 to 8 low rank characters and includes a half page isometric map — although it’s based on a full page hand inked map you can download for free from this product’s page. Also included for this nasty, ambush predator are 8 commonly seen mutations, a 2d12 bone pile discovery table and pages of useful information on this all-new, ‘halibut human’ of the wastes. Grab ‘em all here: https://www.outlandarts.com/mondaymutants.htm