ALL IN THE FAMILY 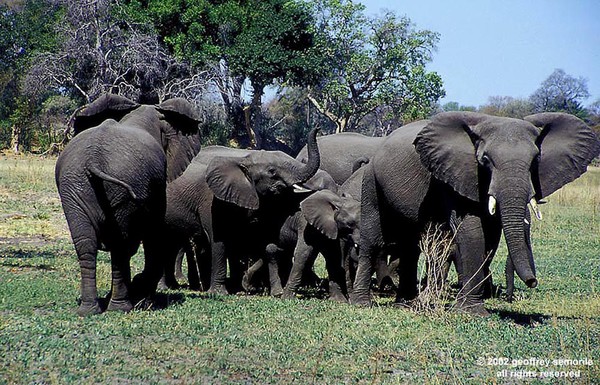 AFRICAN ELEPHANT FAMILY - AFRICA - BOTSWANA - DUBA PLAINS GAME RESERVE-------------------The elephant is such an intelligent animal and they are so very social in nature. The way they care for their young is touching. They keep them close by and constantly caress them with their trunks. The group or family will surround the young keeping them at the center of the larger animals to protect them from predators as seen in this image. The arrival or our rover had startled this group and you can see all their behavior patterns in this one image. The ear flaring, raised trunk and trumpeting as they keep the young close in the center of the group. Elephants live very long lives some to 50 or 60 years. They also have very long memories, to watch them grieve over the death of a family member of their group is beyond words. They will come back to caress the bones for years in the wild. The Asian / Indian species are the ones used in the circus. They can be domesticated, unlike the African elephant a much more unpredictable beast in that setting, to their credit they just refuse to take orders. This image is the African elephant; the immediate difference is in the ears. The flaps are much bigger and more leaf like than the Asian species. The African elephants are much larger than the Asian species. Despite their impressive stature if startled, alarmed or angered they will flare the ear flaps out and trumpet as seen in the animal to the far right in my image. This is to make them appear bigger and more dangerous to the object of their displeasure. When you see an elephant do this it is time to leave the scene to avoid becoming peanut butter and jam. When they flare the ears and trumpet their next move will be to charge. I have had to outrun them a couple of times, but I think they let me win on purpose. My impression was they truly enjoyed scaring the pants off me.

They have alot in common with parrots being very sociable and having long life spans. Very nice image.

Great shot that captures the natural behavior of these animals.