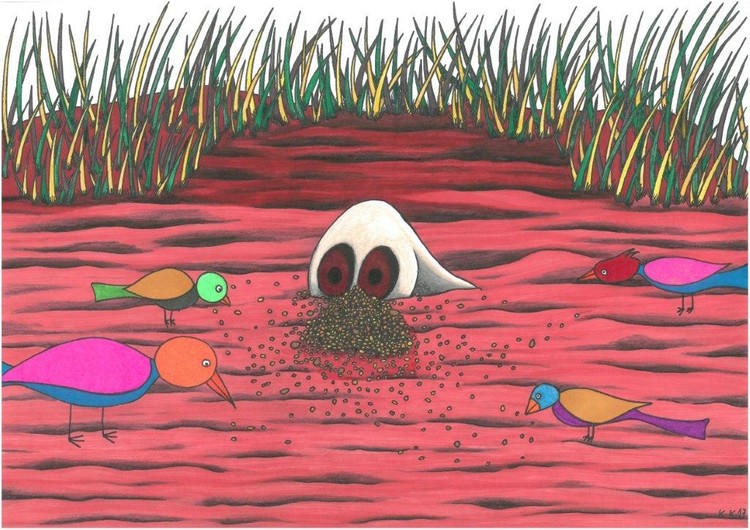 About the birdapostles, addicts to sniffing the bird feather, I spoke already in the post - see - http://lutakzvonko.blogspot.hr/ 2016/01/pticostoli- birdapostles.html but these interesting residents of the Magic Valley deserve more attention due to their imagination shown in the drawing. It is well-known that a psychically stable birdapostles once daily sniffs his bird (usually a canary or parakeet at home) and so in a moderate and healthy way he constantly contributes to his physical and intellectual development. The largest number of birdapostles have been proven, with time becoming sick - addicts to bird scents and constantly looking for new species of birds to satisfy their need for fragrant bird feathers in their nose. Finally, as the ultimate pleasure of sniffing, Olimp delight, there remains the Orangebeak, the birds whose smell - as birdssniffers claim - bring to the state of Nirvana. The problem is that the Orangebeak, that beautiful and delicate bird, dies if it only gets caught in hand, there is no talk of life in captivity. That is why two experienced birdapostles have to associate and carefully carry out the next procedure (which is a strictly guarded secret). First they excavate, in the area of the Orangebeak, the hole in the earth where one of them lie down, then the other covers with the earth, so that his nose is just above the ground. A special blend of seeds is then scattered around the nose with the larger pile in front of the nostrils. The birdapostles helper then leaves and the buried birdsniffer wait patiently, not moving, hoping this plan will succeed. The experienced birdsniffer is able to remain motionless for a week, catching with its exquisite flair smells of this extraordinary bird. A3 format, for sale