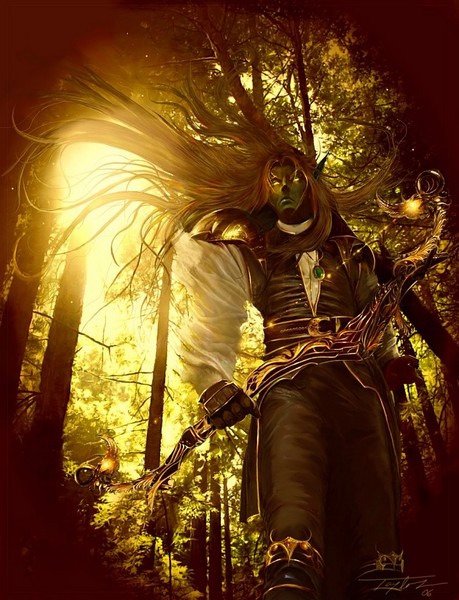 Decided to try a different painting technique, a bit more suggestive impressionist realism. It turned out okay I think :/ This piece is one that I entered into Blizzard's WarCraft contest, but if you know about my Sorche novel (which this piece was originally intended for), then you're familiar with this character remake. Kasager Vagont wielding his signature magical bow, the Arco de Luz (meaning Bow of Light) which was forged by his adopted father, Parcis. The Arco de Luz generates various elemental arrows (fire, water, earth, wind, light, and dark) and combined with Kasager's inborn speed, fires them in rapid succession. The bow can also morph into the Sword of Retribution, which carries the same elemental abilities. Put in many evenings on this one and a lot of detail. details: http://kre8tivekonceptz.com/arcodetail1.JPG http://kre8tivekonceptz.com/arcodetail2.JPG http://kre8tivekonceptz.com/arcodetail3.JPG + Wacom + Corel PhotoPaint

Artist Reply: Heavy? As in too much to read? Or is it too far fetched for you? At any rate, thank you for viewing the art. :) And I'm glad that you liked it.

My pick of the day Darryl. This is more than awesome!!

Artist Reply: Thank you, Cezanne! Glad that you enjoyed viewing it. And an honor to have you choose it as a pic of the day. Thank you :)

This is way cool Darryl...nice job

Artist Reply: Thanks alot, Chuck. One of my favorite characters from my novel.