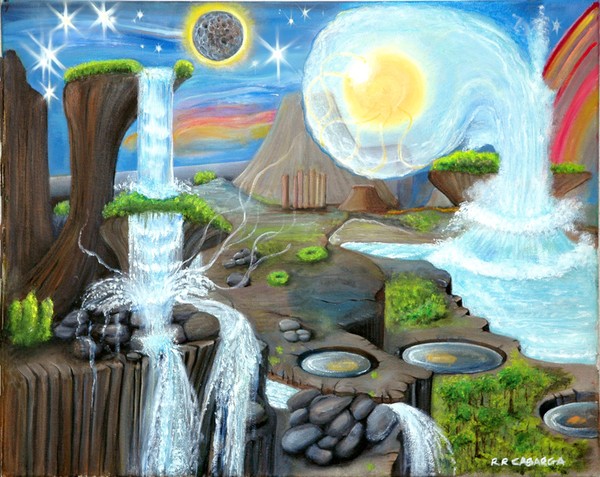 When night falls upon the unstable planet, the giant water blob rises up out of the sea and checks on her bloblets nestled in their holes. Spring sprites wind their way up drawn by the irresistable electro magnetic attraction of her nucleus. A recently fallen megacolumn lay in the background after being whacked by an orbiting moon. The moon was knocked clear into the next solar system where it careened through a splatch of Quamflochulards having a picnic, scaring the bejeezers out of them. In about 300 years it will make an appearance in a Buclidean little league baseball game and completely confuse the first baseman causing the Cghelkts to lose the Bleghablegh Series for the first time in three picoseconds.

This painting has been sold

Very nice use of the water on this planet just wondering how that critter got the water to flow that way.

Artist Reply: Thanks Donald! If I'm not mistaken correctly, that critter IS the water. Although those biohydrolofts are a strange life form and they've been known to lie so that could be a bunch of B.S. The hard part was getting it to pose for this painting.