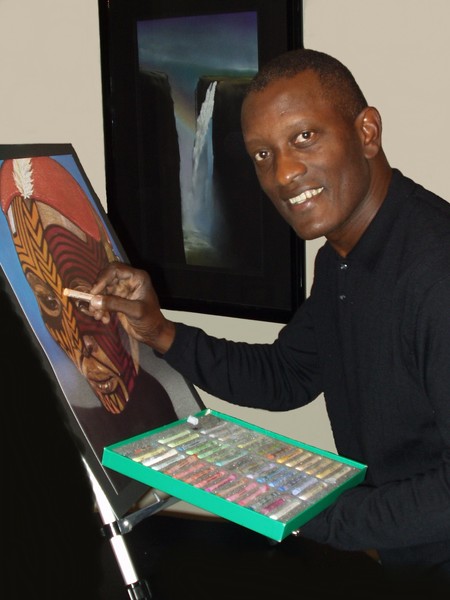 My life and Art is a product of the turbulent and emotion-packed 1960's, first only a street kid living in the Lonsdale Homes "Projects" and then a rock-and-roll drummer for a Regionally famous funk band "Freddy and the Flamingo's" working the Motown Artist "Chittlin Circuit " and opening for such acts as: Funkadelic, Bill Withers, Rufus Thomas, Johnny Taylor and Mary Wells, just to name a few. Sporting bigger than real Afro hair and fur-trimmed knee-high boots, rocking Knoxville's world. I Later worked as a draftsman for TVA (Tennessee Valley Authority), and served five proud years as a patrolman for the "KPD" Knoxville City Police Department.

Vicissitude, the core expression of my artistic exploration, is based on an abstract geometrical triptych expressing what I felt and experienced as a young man in the south of the 1960's with the challenges of intergration and trying to interpret the stories my father told me about his childhood in Georgia during the Jim Crow years. The idea for the three panels came to me over a six-year period ( they represent the Past , Present , and Future of the black race ). During this time I developed my Artistic style and cultivated a confidence about my God given talents.

Geneva Mathis Taylor (my mother) is my strength and whom all my original artwork is signed, because without her none of this would be possible. A few years later, when the artistic urge was too strong to deny, I moved to the Washington, D.C. area, establishing Geneva Galleries Inc.

All my Original Paintings are offered as Limited Edition Giclee' Prints , Edition sizes are 250 S/N ( signed and numbered by the artist ) with 50 AP's and each print comes with a Certificate of Authenticity. - Custom Archival mounting and framing is included when purchasing Limited Edition Giclee prints, contact Artist for details.