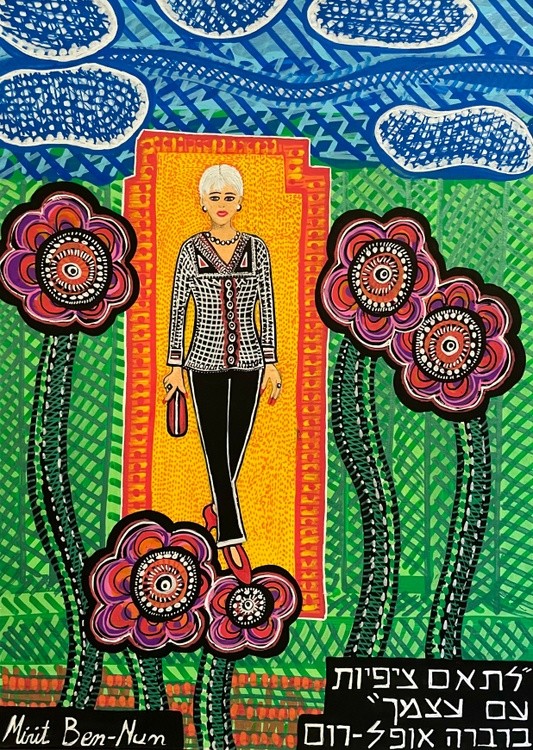 Mirit Ben-Nun paints women, who are called nowadays “career women”; independent women, who are not dependent on men or husbands, who have their own room, their own office, own studio (their own bank account) and their own dream. The writer Virginia Wolf believed that it all begins with “your own room”, a defined space, even a small one, that has four walls and a door and is all yours; there you can recognize the dream, and be who you are. The women Mirit chose to paint also have a key phrase that leads them in life: “Go your way and leave the doubters behind” (Lior Finkel-Perl); “Put an anchor of ability within you” (Imi Eiron) and also more concise messages like that of Tamar Ish-Shalom: “Do not forget to breathe” or of the economist Karnit Flug, former governor of The Bank of Israel: “Economy is not everything.” How true. Mirit Ben-Nun dizzyingly integrates all of this into her private career, a colorful and spectacular painting, which ranges from Aboriginal diligence to feminist consciousness. Ben-Nun adorns the successful women with a tremendous abundance of colors and patterns, generously and with joy of life she wraps them with ‘mandorlas’ (almond-like shape), which surround each other and create “Babushkas”. Like the women, so do Ben-Nun’s models split unexpectedly, creating intersections and interchanges withing the painting, hinting at new paths. These successful, independent, opinionated women receive a gift from Mirit: they are raised to a level of energy rich in particles, but one that plants them in the heart of it all, they are both the citron and the nucleus. They are the smallest babushka, the princess. Mirit Ben-Nun, an independent woman, who set out without support and without orderly studies, stubbornly made her own way, her own dream, added to her a parade of women, who like Einat Paz, think “better things happen to those who do”. Tali Tamir ‘Your Own Dream’ is a modern Pop art style exhibit of paintings of women, by the feminine spirit of the artist, Mirit Ben-Nun. The painting series of the women was created and inspired by the book “Presence. Impact. Leadership”, and the majority of the women painted in the exhibit participate in this book by Dr. Efrat Liani, published by Kineret Zemorah Dvir.