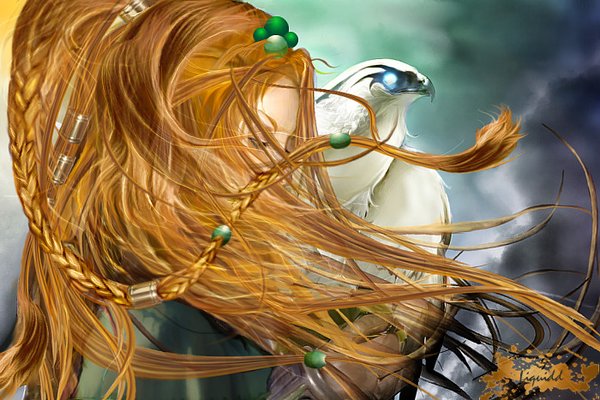 Another character from my upcoming online fantasy novel, Sorche.

Not much is known about the enigmatic Rahne. Due to her nomadic nature and past shrouded in mystery,information about her is somewhat scarce. She is an enigma, a ghost.

Her quiet demeanor and reluctance to trust others also hinders gaining relevant information on her. All that exists of her are whispers and rumors of a jade clad warrior with a unique fighting style and ever evolving magical prowess.

Although very little is known about Rahne publicly, much is revealed in the journals of the deceased Master DragonMage Merrick. Lorini, unaware of Merrick's death, happened upon these journals while seeking the aid of the mage. The journals chronicle how Merrick found young Rahne shaking and alone in the midst of a burning village.

Taking her under his guidance, he tutored her in the ways of the dark mages. The journals tell of how Merrick watched Rahne grow and exhibit abilities he described as belonging to an ancient race of nomadic necromancers (Moyen) who once inhabited Sorche'. And how he began piecing together her past and eventually telling her of the destiny which awaited her.

Your work is amazing! Your attention to detail and color are fantastic!