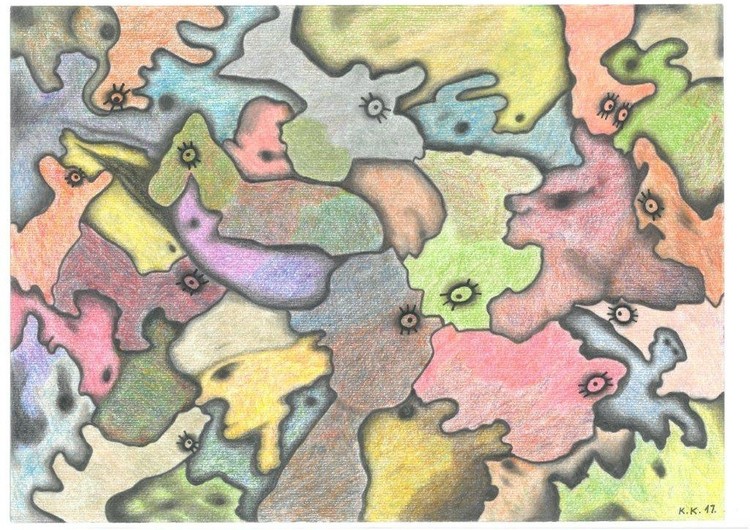 A group of well-known artists in the museum area in the audience's presence created their works, so I went to the museum to look at this cultural event. Going behind the museum building I noticed a lot of paper, paint, broken brushes, half-completed work and other rubbish which artists rejected during his creative process. At that moment I heard a rustle behind piles of waste art. Much to my surprise, my teacher, magician Cirilo Bum, pulling the used papers, sketches and other other unfinished works that artists are thrown. - What are you doing here? I asked him. Wizard Cirilo Bum found some discarded pen and put it in his pocket so it starts quickly move away, carrying a few sheets of paper under his arm. - Come on after me - call me. I reached him just at the end of town and we sat on the bench. The branches of a tree towered above us like a hand that protect us. Cirilo Bum stretched a piece of paper and happily exclaimed - Excellent! So many creatures are waiting to be born! I saw some patches of different colors, perhaps the artist experimented with color in this paper. Cirilo Bum took out a pen and quickly begins to harrow the paper. It was concentrated, in the form of rolls, his mouth was half open, like a grandfather who must quickly write a will because death is sitting on his neck. - How beautiful you are! Live! - He would say after he had finished some character. For me, his creatures he painted on the paper, which he was so rejoicing, is a living horror, far from the notion "Art must strive for beauty". - Energy color, energy in my hand, the energy in you - talking to a sheet of paper old wizard - that no one has see you, does not mean you will not be...yes .... live, live my little rhino ... - he would murmur so. Knowing this state of trance in which he sometimes slipping, I went to the museum because wizard Cirilo Bum was no longer capable to talk. Later, I realized that I was attending a specific magical procedure but my eyes were green. A 3 format

A group of well-known artists in the museum area in the audience's presence created their works so I went to the museum to look at this cultural event. Going behind the museum building I noticed a lot of paper paint broken brushes half-completed
$ 100.00